The Magic Of Nicole Dennis-Benn 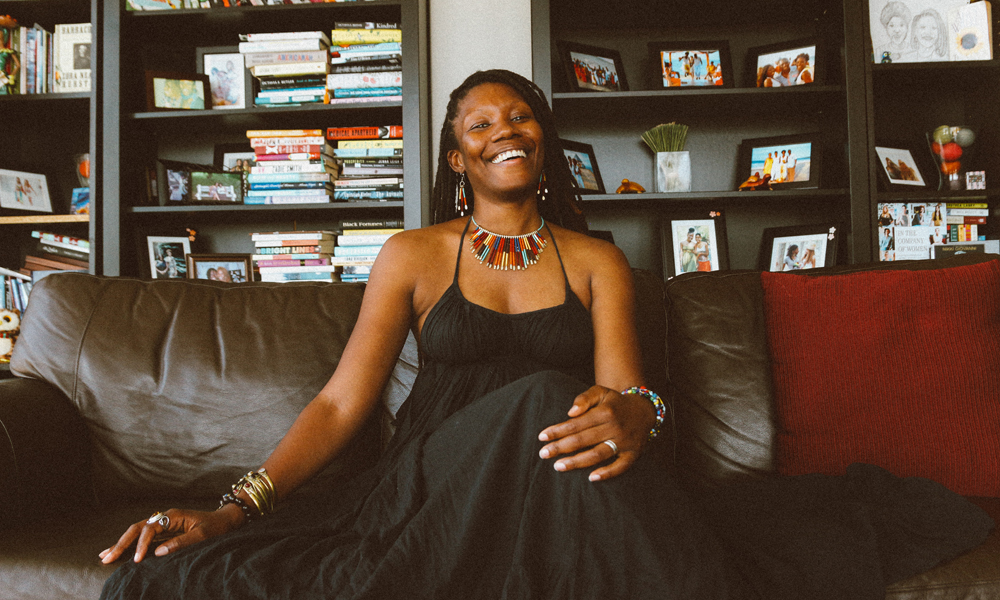 Jamaican people wear their resilience with pride, a testament to our inherited ancestral spirit, and a trait that allows us to shoulder adversity with a particular kind of unmatched perseverance. For author Nicole Dennis-Benn, this is what has allowed her to tell the narratives of the country’s LGBTQ+ folks through her literary works, which also somewhat serve as a reflection of her own life experiences.

Dennis-Benn’s debut novel, Here Comes the Sun, and her forthcoming work Patsy, breathe life into untold stories, centring Afro-Caribbean queerness with the Land of Wood and Water as its backdrop. Through her literary contributions, she has made it her mission to make known the plights and experiences of Jamaica’s working-class people, a self-assigned task that was largely informed by her own upbringing.

Surrounded by wealth. Her father, who lived in New York and drove taxis, frequently sent down money that – in addition to a scholarship she was awarded – afforded her the opportunity to attend one of Jamaica’s most prestigious educational institutions, St. Andrew High School for Girls.

Once she had graduated high school, she decided to pursue a path in the sciences. She moved to New York to live with her stepmother and father, and climbed further up the academic ladder. While in the United States, she received her BA in biology and nutritional sciences from Cornell University, as well as a Masters of Public Health from the University of Michigan, then decided she would go forth in obtaining her PhD. It wasn’t until her now-wife, Emma Benn, encouraged her to pursue her passions – as she saw how unhappy Nicole was – that Nicole began taking writers’ workshops in and around Brooklyn, finally making the decision to enrol in an MFA (Master of Fine Arts) at Sarah Lawrence College.

Up until then, Dennis-Benn had used creative writing only as a means to navigate her own feelings of being homesick. She hadn’t necessarily considered it as a viable career – but once she found her footing, she realized that her writing allowed her to unpack the tensions that she was a witness to between race and class in the realm of tourism while growing up on the island.

These experiences and observations come to life and are amalgamated in Here Comes the Sun. In the novel, Dennis-Benn tells the story of Margot, an employee at an upscale Montego Bay hotel who is willing to go to any lengths to provide a better life for her younger sister, Thandi. For Margot, this often means engaging in sex work with the hotel’s affluent, male, white and older clientele. But she’s also navigating her feelings for her lover, who is a woman, an expat by the name of Verdene. Through the exploration of familial and intimate love, race, class, homophobia and self-acceptance – all set in a post-independent 1990s Jamaica – Dennis-Benn uses her talents to tease out the nuances of a particular Jamaican reality.

Another aspect of Jamaican reality that Dennis-Benn has made one of her literary signatures is her intentional usage of Jamaican Patois in her characters’ dialogues. The politics of Patois and its employment are often up for contestation because of its implications (who uses versus doesn’t use it in Jamaica; what it means to use Patois over Standard English, etc.), but Dennis-Benn found it necessary for it to be the artery that connected her characters with one another, as well as being a way to affirm the language’s legitimacy among its users, despite the supposed baggage it carries.

Through her work, Dennis-Benn touches on subjects and topics of conversation that most people in Jamaica refuse to unpack past the surface level – it’s the same kind of fearlessness she applied to her own life when she had her wedding ceremony back home in 2012. The year prior, she and Emma Benn had taken their vows in the United States once the Marriage Equality Act was passed, and they wanted to have the official ceremony on the island. The planning began and they found a compound that was willing to facilitate their celebration, but once the biggest media outlets – the nation’s two newspapers, The Jamaica Gleaner and The Jamaica Observer – found out about their wedding, the event became more about making a spectacle of the two rather than being a celebration of their love. Dennis-Benn feels grateful for the people who were able to make the ceremony a reality, but it’s a reminder that while Jamaica is in a state of metamorphosis with regards to LGBTQ+ rights, there’s still a ways to go.

Dennis-Benn explores some of this in her highly anticipated sophomore release, Patsy. The novel’s main character, Patsy, leaves Jamaica for the “American Dream” and reunites with her secret lover, Cicely, but when she arrives, she finds that America is not quite what she expected. Back in Jamaica, she leaves behind a young daughter, Tru, who grapples with her own sexuality and sense of abandonment, leaving the novel to ultimately unravel the intersection of immigration, motherhood, identity and sexuality. It’s a timely piece of work that Nigerian writer Chigozie Obioma, author of The Fisherman, calls “beautiful, shattering and deeply affecting.”

Though the beginning of Dennis-Benn’s literary trajectory was unplanned, it’s led her to some impressive accolades. Not only was she a Lambda Literary Award winner in 2017 but she was also a recipient of the New York Foundation for the Arts Artist Grant in 2018. A young girl from a little island in the sea has taken the literary world by storm, and unapologetically so. Being a champion for the underdogs and marginalized is just another testament to Dennis-Benn’s longstanding resilience, and makes her contributions that much more important.

SHARINE TAYLOR is a Toronto-based music and culture writer as well as the founding editor-in-chief and publisher of BASHY Magazine.