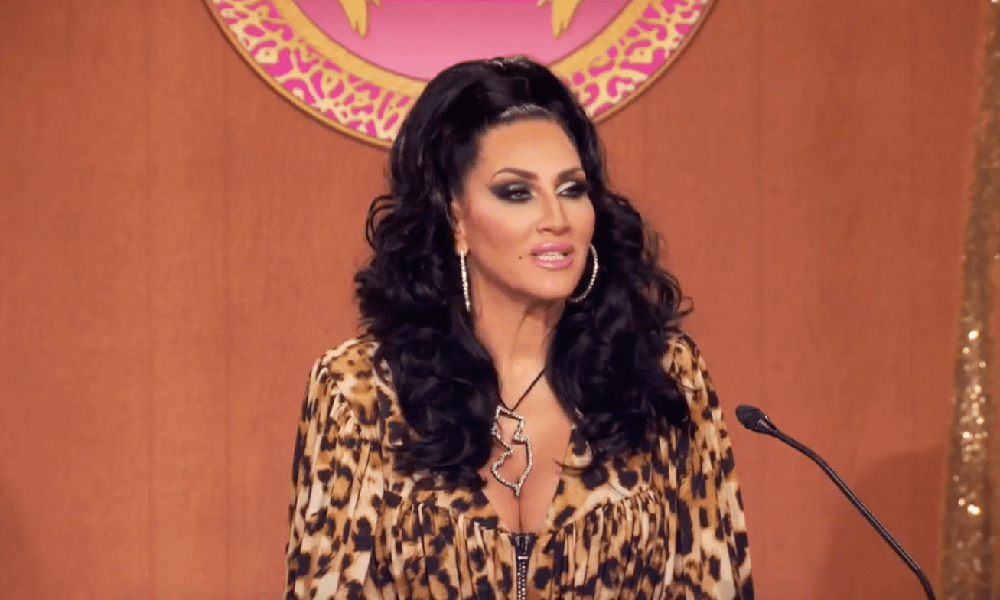 So. Much. Leopard Print…

It’s been a week since our favourite Shady queen Gia Gunn was voted off the island. This week’s episode opens with Latrice, tired off the drama, saying how glad she was that Gia was gone. Manila comes to Gia’s defense, saying she was a trailblazer, and sympathizing with how hard being in this competition must have been for Gia, but also agreed that it was time for her to go. Also agreeing on Gia’s departure was Trinity, who revealed that she too picked Gia’s lipstick ahead of the lip sync. Valentina brings Manila’s alternative plan to the table, and thanks her for keeping her around, but in the confessional reveals that she’s keeping her eye on Manila, and I don’t blame her.

The next day in the werk room, Valentina continues to serve lewks in my personal favourite sub-plot of this season. Ru appears and tells the queens they will be on an over the top Jersey themed courts show Jersey Justice, hosted by Jersey Queen Michelle Visage (shocking). The queens split themselves up in to teams. The teams are as follows: 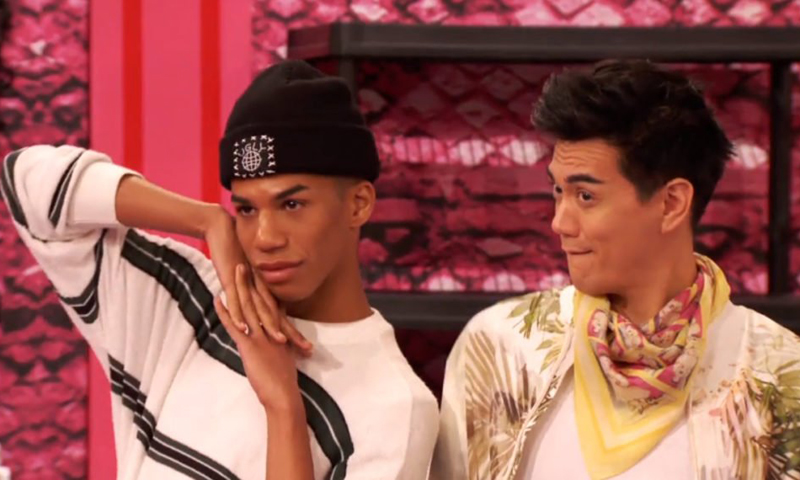 The rehearsals for the improv challenge are underway, and it looks like Latrice may have a case of the Snatch Games again, because she becomes easily frustrated when she can’t get a word in between the two Mo’s constantly shrieking at each other. She. Has. Had. It. OFFICIALLY. On the other hand, Team Two seems to be getting along nicely. Naomi is honoured to be working with legend Manila, while Manila is happy to be on a team with the fierce, and consistent Naomi. Team three is also looking strong and ready for battle, but not before Trinity gives Valentina an important lesson on accents. Valentina is up for the challenge, and Trinity wants to make it work, and tells Valentina she will do whatever she can to make her feel comfortable with the challenge.

It’s time to go to court. Michelle, the perfect mix between Judge Judy, and a d-list cast member from Jerseylicious, sits atop her courtroom throne, and we all know some stuff is about to go down. First up is Manila and Naomi. There is so much leopard print I can hardly concentrate on the case at hand, which has something to do with a dog groomer being mistaken for a hair salon. Manila and Naomi are a strong team, they play off each other well, and they’re both getting laughs. Ru even makes a cameo appearance as the courtroom reporter, in what I can only describe as the most disturbing moustache I have ever seen on a drag queen.

Next on the docket are Monique, Latrice, and Monét. They are fighting over something to do with an offensive wedding cake. Latrice seems to be sinking a little, not meeting the intensity level of Monique’s high pitch squeals. Then enters Monét, playing Latrice’s daughter. Monique was carrying the team, but the story did get confusing when it completely fell off the tracks, and got boring. However, it did somewhat redeem itself when the queens started a full on cake fight, and it did end with Monique and Monét making out to make up. Not as strong as it could have been, and we all know it. Third in the courthouse are Trinity and Valentia. Trinity, a vision in a bump-it, it suing Valentina, a questionable Snookie impersonator, and I really hope these two knock it out of the park. Bada-Bing, Bada-Boom, these two are following a storyline, and even when the punches start being thrown, it adds to the story, not a distraction from it (we’re looking at you Latrice, Monét, and Monique). 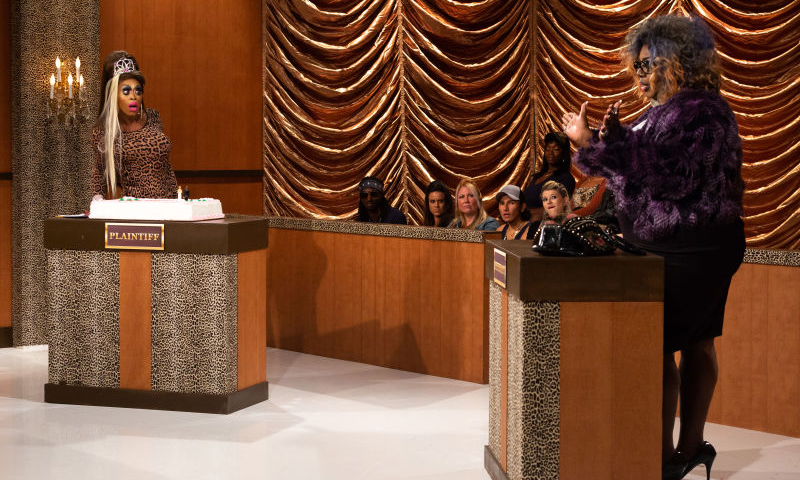 It’s main stage elimination day, and the category is Swerves and Curves, which means the queens will be padded for the GAWDS henny. Valentina walks into the werk room, and apologizes for her lazy look (Prada, Prada, Saint Laurent, and Zara) I hope she never leaves. Trinity and Valentia are both feeling strong about their performance, and Trinity tells Valentina she more than redeemed herself from Snatch Game. Latrice feeling (falsely) confident in her team’s performance tries to come for Trinity, but Trinity gives it right back to her. Later on, Trinity is gooped dot com when Valentia tells her she would send her home over Latrice, simply because of Latrice’s legendary status. It seems like Trinity might be the only queen that would actually take that risk. Out on the main stage, Ru greets the staple judges, and this week’s guests, Zoë Kravitz, and Erica Ash before the main event begins.

The judges critique both the runway and the jersey courthouse challenge. Though all the ladies were given praise for their runway lewks, Manila, and Monique were the tops of the week for their fantastic job in the improv challenge. Leaving Trinity, Naomi, and Valentina safe for the week. Latrice and Monét are this week’s bottoms.

Backstage, it gets emotional pretty fast, with Latrice and Manila crying almost immediately. Valentina, living in her own personal telanovela, tells the other queens she is deeply offended by some harsh criticism on her outfit. It’s a bit out of touch, but we don’t expect anything else. Monét and Monique talk strategy, and how hard choosing someone to eliminate will be this week. While on the other couch, Manila and Latrice continue crying while holding each other. Through tears Manila tells Latrice she is her best friend, and that she will do everything she can to win this challenge in order to save her. Meanwhile, the safe girls (mainly Trinity) are talking about how silly will be in Manila’s part to save Latrice only because they’re friends. Monét feels like she knows she’s going home if Manila wins the lip sync, and feels the shade of it all.

The time has come for Monique, and Manila to lip sync for their legacy to Tina Turner’s cover of The Bitch is Back, featuring a little good luck from Elton John himself (I’m gagged). After electric lip sync, and a lot of sequins, Ru announced the winner of the week was Monique. In the end, Monique chose to eliminate Latrice. This may have been the toughest elimination of this season. Latrice sashays away, and perhaps the only person more upset than her is Manila. But Latrice is always large and in charge and this certainly IS NOT the end of her.

Takeaway from episode 4: Sigh… It looks like we’re still playing RuPaul’s Best Friend Race. I only wish things would shake up a little to spice up the competition.

Frontrunner of episode 4: Trinity lurking in the back of almost all of the shots, with that look on her face makes her the only true fierce competitor as far as I’m concerned. I hope we see her all the way to the final.

What we’ll see next week: It’s roast season! And the queens are roasting none other than the legend that is Lady Bunny. And it looks like we’ll see our first twist of the season as All Star rules are suspended for the first time in Drag Race herstory.