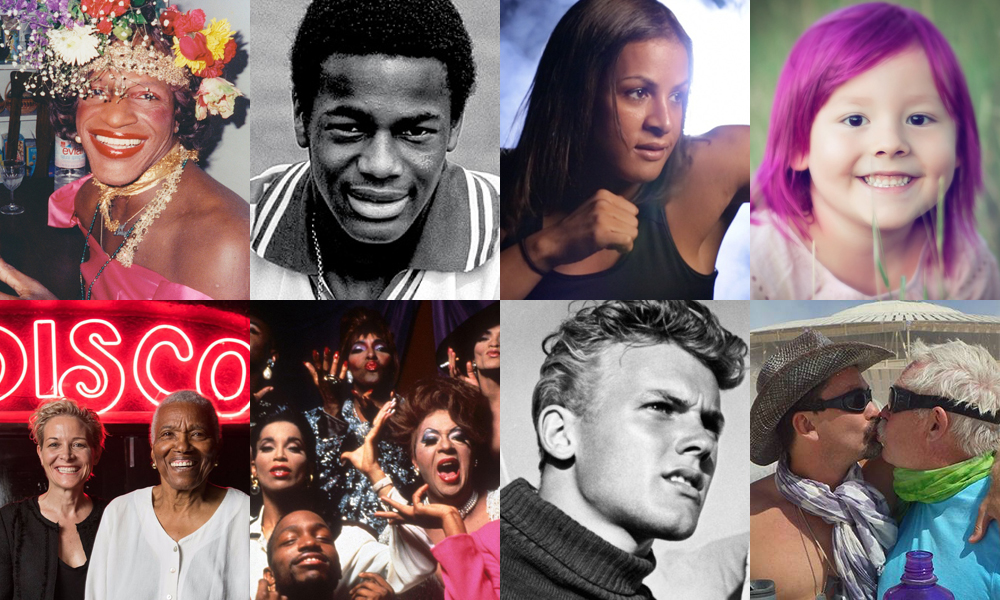 LGBTQ documentaries to catch on Netflix this holiday season: Teach your family a little queer history…

It’s that time of year again – time to head home to see your families for the holidays. We all love of our families but sometimes we need an escape…what no cable? Fear not, we have our top 8 LGBTQ documentaries streaming on Netflix to get your through the season. And why not play them on the big TV in the family room; teach ‘em all a little bit about LGBTQ history.

The Death and Life of Marsha P. Johnson
(2017)
The film uses archival footage and current day interviews to tell the story of Marsha P. Johnson. When the Stonewall Veteran and beloved Greenwich Village local turned up dead shortly after Gay Pride in 1992, it was one more in a series of murders, gay bashings, and “mysterious” deaths in the local gay community. Like the other suspicious deaths, Johnson’s death is quickly dismissed as a “suicide”, even though there is no evidence to suggest as much. Police inaction leads to protests in the streets yet few answers. It is not until decades later that transgender crime advocate Victoria Cruz succeeds in getting some answers (but not all of them).

Forbidden Games: The Justin Fashanu Story
(2017)
This is the tragic story of the first and only football player, Justin Fashanu, to come out as gay whilst still playing professional football.  The film tells his story, from Justin and John (his brother who is also a football player) as orphaned brothers in the impossibly white Norfolk village of Shropham, through early success on the pitch with Norwich FC, to decline and his ultimate death in 1998, in auspicious circumstances.

Game Face
(2015)
Game Face shows the quest to self-realization of LGBTQ athletes and their acceptance in society. The documentary tells the parallel story of Fallon Fox, MMA’s first transgender pro fighter, and Terrence Clemens, a college basketball player in Oklahoma who happens to be gay. The film follows both athletes during their coming out process, and sheds light on the obstacles LGBTQ sports players deal with throughout their career.

Growing up Coy
(2016)
The film follows Jeremy and Kathryn Mathis and their five children over several years in Colorado. One child, 6-year-old Coy Mathis, is a young transgender girl and who had came out as transgender in kindergarten. She was able to use the girls bathroom freely until the first grade when the principal informed the parents that moving forward, Coy would only be able to use the boys bathroom or the nurse’s bathroom…the parents fight the decision. The film documents the landmark 2013 case in which the Colorado Civil Rights Division ruled in favor of transgender 6-year-old Coy Mathis.

Jewel’s Catch One
(2016)
This film celebrates the legacy of a legendary Los Angeles nightclub, Catch One, and the life-changing impact its owner, Jewel Thais-Williams, had on her community. One of the original safe spaces for disenfranchised communities, The Catch also served as a refuge for many during the AIDS crisis. As her club grew to become known as the unofficial “Studio 54 of the West Coast,” Jewel became a national model for how to fight discrimination and serve the less fortunate as she fought tirelessly against racism, homophobia, and hate for over four decades.

Paris is Burning
(1990)
If you haven’t seen this cult film that quickly became part of the ‘Queer Canon’, now is the time. Filmed in the mid-to-late 1980s, it chronicles the ball culture of New York City and the African-American, Latino, gay, and transgender communities involved in it. Most of the film alternates between footage of balls and interviews with prominent members of the scene, including Pepper LaBeija, Dorian Corey, Angie Xtravaganza and Willi Ninja. Not only does the film document the lives of these players but it also explores how its subjects deal with issues such as AIDS, racism, poverty, violence and homophobia. Many critics consider the film to be an invaluable documentary of the end of the “Golden Age” of New York City drag balls, and a thoughtful exploration of race, class, gender, and sexuality in America.

Tab Hunter Confidential
(2015)
In the 1950s, Tab Hunter is number one at the box office. He is also number one on the music charts. He is Hollywood’s most sought-after star and America’s boy next door. His name is romantically linked to some of the starlets of the day – Natalie Wood, Debbie Reynolds and Sophia Loren to name just a few. Nothing, it seems, can damage his skyrocketing career. Nothing, that is, except for the fact that Tab Hunter is secretly gay. And would remain in the closet for most of his career. But In Tab Hunter Confidential, Tab shares not only his secret but the whole story of a happy, healthy survivor of Hollywood’s roller coaster.

The Untold Tales of Amistead Maupin
(2017)
This documentary examines the life and work of one of the world’s most beloved storytellers, following his evolution from a conservative son of the Old South into a gay rights pioneer. This film moves nimbly between playful and poignant and laugh-out-loud funny. With help from his friends (including Neil Gaiman, Laura Linney, Olympia Dukakis, Sir Ian McKellen and Amy Tan) Maupin offers a disarmingly frank look at the journey that took him from the jungles of Vietnam to the bathhouses of 70’s San Francisco to the front line of the American culture war.