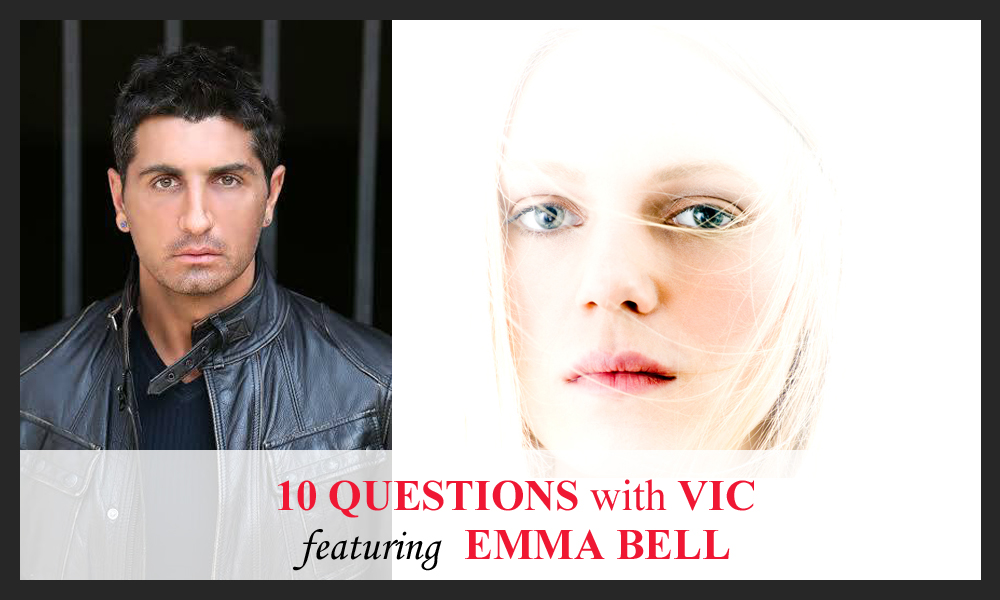 Emma Bell has been on so many hit TV shows since the onset of her illustrious acting career on the New York stage, that she is already television royalty. Walking Dead and Dallas are just a few shows to make fans swoon when they meet her. But Broadway and TV success has not stopped Emma from taking her career to the next level, by writing and directing her first feature film. She took time from her very busy schedule to chat about her career, recent nuptials and upcoming projects.

Your acting career started at twelve years old, with an Off-Broadway cabaret show in New York. Tell me about that.
My mother started a career in cabaret and had earned some accolades in that community for her first show. I went to every performance and fell in love with the live audience love. Being a natural ham and determined to be on stage myself, I convinced her to put me in her second show. I remember she let me design my costume for the show which was, of course, a gold lamé tube top dress with a crushed purple velvet cape skirt over it. I wasn’t very popular in school and was excited/mortified when I learned all the cool girls were coming in to see the show during our run. Not sure what they thought, although they did notice me the next Monday.

Most actors are lucky to get one TV show, while you’ve already been in three successful ones. To what do you attribute your successful career?
Thank you for saying successful! I think no one really feels that way no matter what level they are at. I would say my TV success had to do with an almost alarming amount of denial and sheer optimism in the face of overwhelming rejection. Success is mostly about staying in the game and for that it takes a particular kind of person. I’ve always had hobbies that I fill my downtime with to keep my mind sane. I have a wonderful support system of friends and family who always make me feel like my next job is just around the corner. I work out every day to get endorphins pumping, oh and I had a fair amount of luck to be in the right place at the right time.

Do more people recognize you from Frozen, The Walking Dead or Dallas?
Mostly it’s Walking Dead, although I do get mistaken for Emily Kinney a lot. It’s the blonde hair thing. I get confused with a lot of blonde actresses. I can usually tell by the type of person who comes up to me what they know me from: young or male? Walking Dead. Older and female? Dallas. That pretty much held true until I was walking down the street in NYC and a young construction worker called out, rushed over excitedly and told me he loved/hated my character on Dallas in the thickest long island accent you could find. It was delightful. Also another lesson in not judging a book by its cover. I am particularly touched when someone recognizes me from Frozen. It was such a small film that I’m really proud of.

You wrote and directed the film, Between the Pines, which has been screening at several film festivals. Tell me a bit about the film.
Between the Pines is a dark fairytale centered around a grieving family who recently lost their daughter in a tragic accident. Right now it is a short film but I am working on getting financing for the feature length version. I realized over the years I am far too much of a control freak to be satisfied with solely the acting journey. I needed to have my hands dirtier so I decided to write and direct something for myself and my friends. Pan’s Labyrinth was a big inspiration for this story and all my stories honestly.

Congratulations on your recent nuptials to fellow actor, Camron Robertson. How did the two of you meet?
My husband and I met doing a play. Our mutual friend ran the theater company, Not Man Apart, at the time and asked me to be the Goddess Athena in their next production of Ajax in Iraq. I didn’t know Camron at the time but during the rehearsals for the show we started secretly dating. By the end we were a done deal.

Is balancing personal life and career easier being married to a fellow thespian?
Being married to a creative person I suppose is easier in some ways. I wouldn’t know, I’ve never been married before! He is incredibly supportive of me and understands the challenges that working in Hollywood presents. I attribute that to being a generally amazing man but also yes understanding the lifestyle of an actor. I couldn’t imagine being married to anyone else.

What made you participate in the NOH8 Campaign?
The fact that we even have to have a campaign about not hating people is a weird reality to live in. Love is love and everyone has the right to be in love with whoever they choose, I don’t understand the arguments against that.

What is your favorite charity or cause?
There are so many amazing charities and the amount of worthwhile causes can be overwhelming. I think pick one that matters to you and run with that. For me I try to focus on environmental protections and female right advocacy groups. I’ve been a member of the Sierra Club for the last 10 years as well as the Environmental Protection Agency and the NRDC. I’ve also supported Planned Parenthood since I was a teenager and using their health services myself. Other than that, the best way to support a good cause is in your vote. Know what your representatives stand for before you vote them into office!

One of your two books is about to be released. Can you share a bit about that?
It has taken me about 8 years to write my first novel entitled Realms: Kingdom of Ash. It’s the start of a trilogy (hopefully). I grew up inhaling the tales of Tolkien, L. Baum, Lewis and Rowling and have a very healthy love of fairytales. So Realms is a historical drama, just kidding, it’s a fantasy. It was important the story had a female hero since that’s not something the fantasy genre has a lot of. What I can say about it is if you like the expanse of LOTR and adventures of Harry Potter you will love this book.

Tell me a secret-a good one!
I know all the lyrics to Salt and Peppa’s ‘Shoop’.