10 Of The Most Gag-Worthy Snatch Game Performances 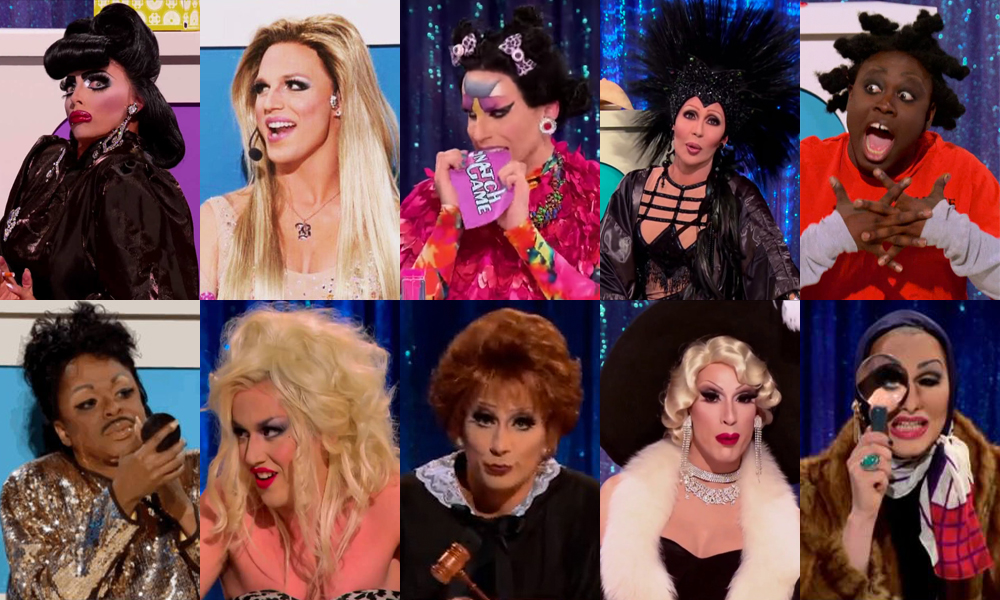 If you can’t bring it during Snatch Game… Why are you even here?

If there is one challenge that Drag Race fans look forward to the most with each new season, it’s got to be Snatch Game. It truly is the make or break challenge of the competition, separating the contestants from the true superstars. Not to mention it gives us great laughs, and higher standards for the next crop of queens. Over the course of 10 seasons of Drag Race, and three seasons of All Stars, there have been roughly 90 impersonations of celebrities, influencers, and even some made up characters (*cough* Kim Chi).

Even though there is still comedy in some of the cringe-worthy worse end of the impersonations, we’re all about looking at 10 of the best impersonations we’ve ever seen on the Snatch Game stage.

10. Alyssa Edwards as Joan Crawford (All Stars 2)
Aside from having other queens impersonate her during the Snatch Game challenge, Alyssa redeemed herself from her attempt at Katy Perry during the season 5 Snatch Game. With her first go at this challenge resulting in perhaps the worst impersonation in Snatch Game HERstory… Alyssa really wowed us when she chose Joan Crawford as her character for All Stars 2. The makeup, and costuming were both over the top, and Alyssa had her face working overtime constantly gasping, and looking confused through the whole challenge. A vast improvement, Alyssa deserves a spot on this most memorable list.

9. Derrick Barry as Britney Spears (Season 8)
It’s Britney Bitch… and for once we’re not annoyed by it. Sure, Derrick spent the entirety of his run on season 8 using Britney as a crutch, both on and off the runway, but the decision to go with what he knew best for Snatch Game was definitely the right move to make. You can always tell when a queen studies for Snatch game, and like it or not, Derrick’s Britney is unclockable. The makeup, hair and outfit were all perfect, and even the choice to have one of Brit’s perfumes as a prop was an excellent choice. Even Michelle Visage thought so.

8. Katya as Björk (All Stars 2)
We’ve got to give it to Katya, she knows how to do weird. Only Katya could do justice to one of the most eccentric pop culture icons ever. Her impersonation of the Icelandic artist consisted mostly of inaudible sounds, and actually eating one of her answer cards had Ru laughing. Her colourful costume and makeup also gets bonus points for not taking the easy way out with that swan dress. Katya’s humour and comedy style was simply the perfect match for Björk, and we’ll never forget it.

7. Chad Micheals as Cher (Season 4)
Legends can only impersonate other legends, and Chad Micheals went with the obvious choice to play pop ICON Cher during the season 4 Snatch Game. Much like Derrick Barry’s Britney, Chad impersonates Cher on the regular outside of Drag Race, and we’re so glad we got to see this art in action. Chad delivered arguably, one of the best, and well polished celebrity impersonations in Snatch Game history with this version of Cher. Everything from the face, to the costume, and voice were quintessential Cher, and we we’re loving every second of it. Sure, other queens have tried Cher, but nothing will ever top Chad Micheals.

6. Bob the Drag Queen as Uzo Aduba and Carol Channing (Season 8)
Bob knows how to work himself into comedy, and did double duty during the season 8 Snatch Game playing two characters. He started with Orange is the New Black actress Uzo Aduba, decked out in an orange jumpsuit Bob delivered a spot on impersonation of Uzo’s character Susanne “Crazy Eyes” Warren. About halfway through the game, Bob switched gears completely and changed into legend Carol Channing. Sure, Bob doesn’t look exactly like Channing, but his heart was in exactly the right place and still managed to get Ru and the others to laugh. This double feature wins a spot on this list because of that.

5. Kennedy Davenport as Little Richard (Season 7)
Kennedy’s Little Richard was groundbreaking. As the first queen to impersonate a male figure on the Snatch Game stage, Kennedy broke barriers, and set the bar high for future queens. Previous to this challenge, Kennedy had been quieter, and flew under the radar. Snatch Game really opened her up, and proved that she was a force to be reckoned with. Though the other queens may have doubted her choice to play a man in Snatch Game, Kennedy delivered a memorable performance, and even ended up winning the challenge.

4. Adore Delano as Anna Nicole Smith (Season 6)
Anna Nicole Smith could have gone terribly wrong, but this is another great example of queens playing to their strengths. There is no other queen that could have played Anna Nicole better than Adore Delano. She even had Ru cackling in the werk room while she previewed the character (thank god!). Adore’s slurred, but perfect speech was essential Anna Nicole, and you can just tell it comes from an extreme place of love and respect. Adore smashed this impersonation, and stole our hearts along with it. She’s a Libra!!

3. Bianca Del Rio as Judge Judy (Season 6)
Bianca was worried after she heard Ru was a big fan of Judge Judy while preparing for Snatch Game. Adding extra pressure to deliver an incredible performance, Bianca didn’t shy away and pulled out all the stops for her impersonation. She got a bunch of laughs, and even included Judy’s infamous court security Officer Bert, as a plush puppet. If there’s anything Bianca Del Rio knows how to do, it’s harshly, and aggressively judge people, and we ate it all up. This choice was perfect, and her interactions with the other queens also made this a standout. This impersonation is so iconic; we’re still quoting it on the daily. “BALONEY!”

2. Alaska as Mae West (All Stars 2)
Alaska came back to All Stars 2 with a point to prove, and a game to play. Everything about her run on the season was so calculated, and pure perfection. So it’s no surprise that her old Hollywood choice for Snatch Game gets a top spot on the list. This was totally Alaska’s game. The comebacks and jokes were quick, and razor sharp. She picked up on every cue, and delivered an absolutely stellar performance. It was glamorous, raunchy, and winner worthy… There’s a reason she took home the AS2 crown, and we think this was a big part of it.

1. Jinx Monsoon as Little Edie Beale (Season 5)
Okay, okay… so this might be a little bias because I have such a soft spot for both Jinx, and Little Edie in my cold heart. To start, Little Edie isn’t an obvious choice for Snatch Game. Mention her name to a group of people, and there will most likely be a few people who have absolutely no idea what, or who you are talking about. For quick reference, Little Edie is the younger cousin of first lady Jackie Kennedy. She lived with her mother, Big Edie, in a crumbling mansion in East Hampton complete with an infestation of critters and fleas. They were the subject of a 1975 documentary (Grey Gardens) about the mother-daughter-duo, their living situation, and their longing for their glory days. Little Edie is the film’s most fascinating character, so it isn’t shocking that Jinx would pick such an eccentric, offbeat target for her impersonation. Her costume, makeup, and quips with the other contestants were all so on point, for a moment I thought I was actually watching Little Edie. All she needed to do was find that Libra man. This may not be your favourite Snatch Game performance but I am quite staunch in my decision S-T-A-U-N-C-H.