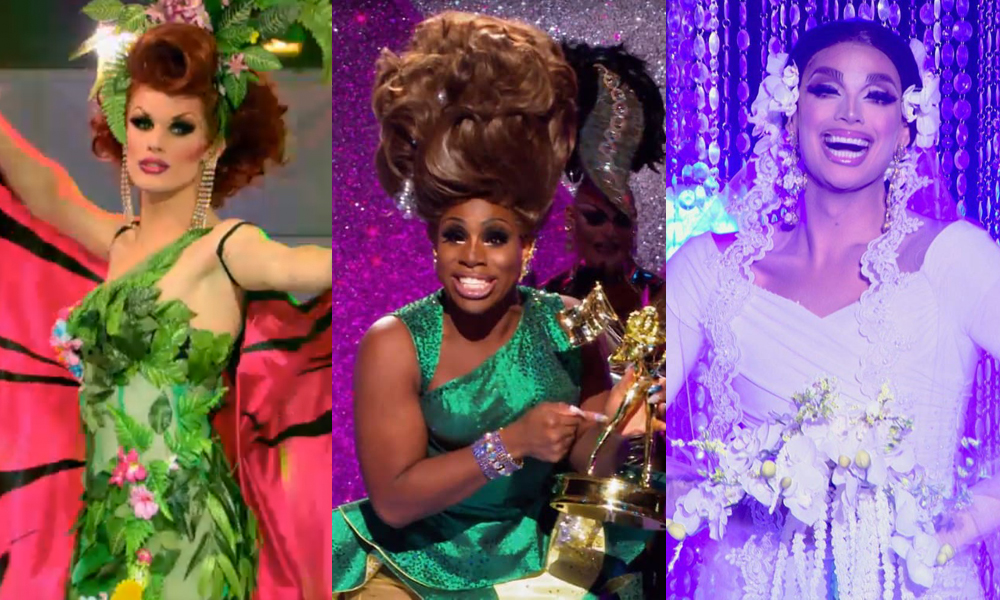 Gentlemen start your engines… and may the best Miss Congeniality WIN!…

With Trixie Mattel winning the All Stars crown this past winter, another season of Drag Race All Stars isn’t due to be out for another year or so, that doesn’t stop myself, or other drag fans of the internet from vocalizing their opinions on who should be cast in the fourth season of All Stars. As much as regular old Drag Race is fun to watch, All Stars is a whole different league of drag. The queens on this list only scratched the surface of their potential on their season and this is why they all definitely deserve to make more of an impact on an All Stars edition. So forget the spoilers floating around out there *cough* reddit *cough* here are 10 Queens that definitely deserve a second chance on RuPaul’s Drag Race All Stars 4.

10. Ivy Winters
(Season 5)
To start, how cute was Ivy Winters? When I think about season five, Ivy is always a front-runner for queens who didn’t get to show their full potential, and also for the crush Jinkx Monsoon had on her. Ivy created all of her own lewks, and used super dynamic materials to make them. Based on that fact alone, Ivy would make an excellent competitor on the fourth season of All Stars. Not to mention she also won her season’s Miss Congeniality title (something that comes up a lot later on in this list), so we already know that the people adore her.

9. Adore Delano
(Season 7, AS2)
Speaking of “adore”… After a memorable run on her own season, she was welcomed back to the werk room for All Stars 2, but left the competition early because she wasn’t loving being critiqued by her new friend, and tour mate Michelle Visage. Though she has already technically been given a second chance at a crown, Adore’s incredible singing talent, which she showcased during her season, make her deserving of another opportunity for the Drag Race crown. We love a Libra with a grunge closet, and an un-cinched waist.

8. Pearl
(Season 7)
During her season, Pearl remembered fondly for her Flazéduh attitude, and for asking Ru if she had something on her face. Though she may not have had the loudest voice in the room, Pearl knew how to turn a lewk, competing fiercely with the season’s winner Violet Chachki. Pearl made it to the finale in her season, but her flawless lewks alone, and her new ownership of being Flazéduhwould make an entertaining addition to All Stars 4.

7. Farrah Moan
(Season 9)
Farrah Moan stayed relatively under the radar during her season except for when she bombed the Michelle Visage roast. It was during the reunion when she called Valentina out for being “fake” after she won Miss Congeniality for Season 9. Since her season, Farrah has continued to slay her sickeningly sweet looks. Her cotton candy hair, and over the top highlight makes her a top contender with other lewk queens. Farrah Moan only began to scratch the surface of her talent on Drag Race, and that’s why she deserves a spot in the next All Stars.

6. Monét X Change
(Season 10)
Monét X Change proved she was a force to be reckoned with during the last season of Drag Race. Between her running sponge dress gag, and friendly disposition, she would be just the right balance AS4needs. Even her fellow Season 10 queens agreed that she was a winner, taking home the Miss Congeniality crown during the finale. Monét’s quick wit, and comedy chops were overlooked during her season by other queens and their drama, but Monét has a lot more to show us, and she would be more than deserving for the chance.

5. Shea Couleé
(Season 9)
A lot like Monét, Shea may have been overlooked during her season because of drama going on with other queens. But Shea always brought it to the competition. During her season she brought fierce, and fun lewks to the runway, and we can’t forget her absolutely slaying Blac Chyna in Kardashian the musical. Shea’s looks were dynamic, and original, and it would be interesting to see what kind of energy she would bring to the All Stars stage. Shea was another queen who would call it like it is, and there should be a good mixture of that in the competition as well.

4. Valentina
(Season 9)
She’s gorgeous, her smile is beautiful, she looks like a supermodel, she’s Linda Evangelista, and a lot of Drag Race fans were shocked she wasn’t given a spot on All Stars 3. After her untimely, and tragic elimination during her season when she refused to take her mask off for the lip sync, Valentina still went on to win Miss Congeniality, which Farrah then interrupted saying it was “fan favourite”, before revealing that sweet as can be Valentina, was actually not that nice IRL. Yikes. I know we’re all here to see her and Farrah reunite and hash it out on television again (can you say Alyssa and Coco circa season 5?). For being relatively new to drag, Valentina executed every look perfectly, and needs to show us what she can do on the All Stars stage.

3. Asia O’Hara
(Season 10)
Asia O’Hara pulled off a near perfect run on her season until it came to the finale. Asia even played mother to the other queens often, and came to the defense of her sisters on the regular. Everybody thought for sure she would make it to the top two until her live butterfly reveal went horribly wrong during the finale. Asia needs to redeem herself from her finale moment, and show us more of what her sweet natured, but fierce attitude can to during an All Stars season.

2. Miz Cracker
(Season 10)
Miz Cracker should have been in the finale of Season 10. Sorry, I said it. After weeks of being told her looks were fabulous, and her jokes are smart, she was almost never recognized for it with a top spot (C’mon Susan Lucci!). Cracker was eliminated at a point in the competition when everybody had reached a point of excellence. Sure it wasn’t fair that Cracker was sent home on her first slip-up unlike other queens (*cough* Kameron Michaels) who were given about 28 second chances, and still made it to the final, but I’m not bitter about it at all. A lot of fans on the Drag Race Subreddit were commenting that strong queens like Cracker and Monét were likely sent home because they were being saved for the next season of All Stars. Here’s hoping!

1. Willam
(Season 4)
This is pretty much just a pipe dream since Willam has notoriously, and very publicly cut any ties she has left with the Drag Race franchise. Lest we forget her entrance into the werk room, and her fierce reads. Willam is the girl in high school we were all scared would make fun of us, but still secretly wanted to be her best friend. Fans have been hoping that Willam would come back for a season of All Stars. Hey, Ru brought Bebe back so anything is possible. Right? I can’t help but wonder how entertaining and amazing another season of Drag Race would be with Willam on it. Sigh… we can always dream.

Some of these queens could be competing for the next All Stars crown. Whoever Ru picks will undoubtedly give us a stellar season with twists, turns, ru-turns, musical numbers, and hopefully a sewing challenge or two. We can’t wait to see who gets to compete for the crown again in All Stars 4.