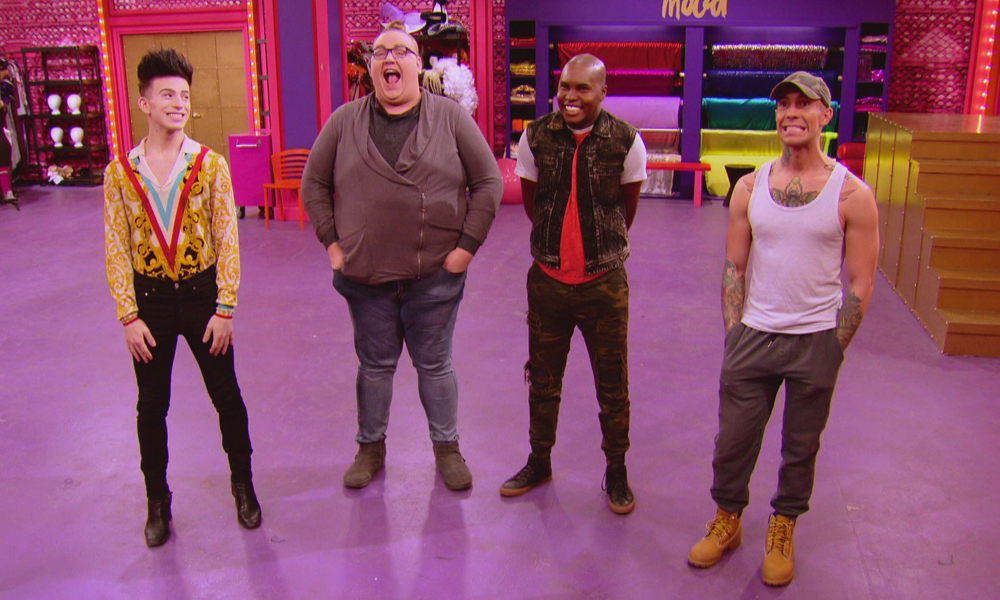 It’s been a week and I am still #Salty4Cracker, but the show must go on and this week’s episode was nothing short of incredible. The episode opened shortly after Miz Cracker’s untimely elimination last week (see you in All Stars 4 girl!). While Eureka pointed out that Kameron had lip synched three times this season, she was shaping up to be pretty big competition. Asia however was “haunted” by her last words to Cracker on the runway (no star quality), and regretted the statement, as it was obviously not true. In the confessional Asia predicted the top three would be Kameron, Aquaria, and herself. What’s wrong girl? Is Eureka finally getting to you? While de-dragging, Eureka was marveling over her beat and asked Asia to basically confirm how amazing she looked. Asia wasn’t giving her any of it. Eureka may have been fishing for compliments, but she’s not catching any this week. It was at exactly this moment, Eureka compared Asia to horror legend, and recent gay icon The Babadook, and I knew this week was going to be a wild ride.

The following day in the werk room the final four reflected on how incredible it was that they had made it this far, and how badly they each wanted to win. Ru appeared to present this week’s challenge. Since this is technically the final episode of the competition there was no mini challenge, as the maxi challenge was quite a big one. The queens were to write their own solo verse to Ru’s song American, that they would then record, and learn choreography to with Todrick Hall. In addition, the final four would also each have an interview on Ru and Michelle’s podcast, a staple for the final queens in every season. When it came to writing their own verses, Eureka decided she wanted to rap, Aquaria was pretty confident in her work (shocker), and Kameron quietly worked on her lyrics. Asia however was pretty vocal on how uncomfortable she was doing the challenge, as she isn’t a natural singer, and felt like she needed to redeem herself after the Cher musical debacle.

Aquaria was up first to record her verse, and while she struggled with finding the proper key to sing in at first, she quickly found her groove, and based on the lyrics previewed, we knew it could only be iconic Aquaria. Asia struggled to find the beat, but after some real advice from Todrick, she not only found the beat, but delivered her verse with passion. Eureka also lost the beat when it came time for her to record her rap, but her character allowed her to quickly get back into it and served us extra. Do we expect any less from Eureka? Kameron was last to record, and wow! I forgot she can actually sing. Kameron was originally worried because she had set the bar so high after winning the last singing challenge in the Cher musical. After struggling to find the right octave to sing in, Kameron’s verse gave us both heart, and soul.

In between the recording sessions the queens were guests on Ru and Michelle’s podcast What’s the Tee? As far as the podcast portions go, it’s pretty standard each season. We usually hear about their first time in drag, when they discovered they wanted to do drag, drama with parents, and what they’ve learned in the competition. Although we hear the same answers every season, it was still nice to get small snippets of our final four’s lives outside of the competition. Between the podcast, and song recording, the queens got a quick break to prepare some wigs for their performance. Eureka bugged Kameron to sing her verse, and when Kameron politely refused, Eureka kept egging her on. Calling back to her slight dislike for Eureka at the beginning of the episode, Asia spoke up and told Eureka to stop bugging Kameron. Eureka explained that she knows Kameron and is just trying to get her to come out of her shell, but Asia just thinks she’s being annoying. The true annoying thing about Eureka is that yes, she is a little too much, but I genuinely thing she comes from a place of love which makes it almost impossible to hate her, key word being almost (and yes, that was a read).

It’s finally time for choreography! Todrick prefaced it as the “most difficult choreography he’s ever presented on Drag Race” and we all know how this is going to go down. It was a time but I’ll break it down for you quickly, because we’ve still got a lot of episode to get through. Aquaria was up first and nailed everything first time because she is what? Perfect. Todrick threw in a split and Eureka was all “uh oh”. Asia was up next, and she didn’t get it at first, but she is an insanely hard worker, and above all else an entertainer, and we all know she’ll pull it through for the performance. Kameron took a while to get into the choreography, but she’s athletic so she’ll turn it out. Eureka was instantly nervous about messing up the routine after her mistakes in PharmaRusical the Musical earlier this season. In true Eureka fashion, she didn’t know the movements now but promised she would know them the next day on stage. Todrick encouraged her to forget sleeping and practice all night, and Aquaria cried tears out of joy and being overwhelmed by how excited she was. 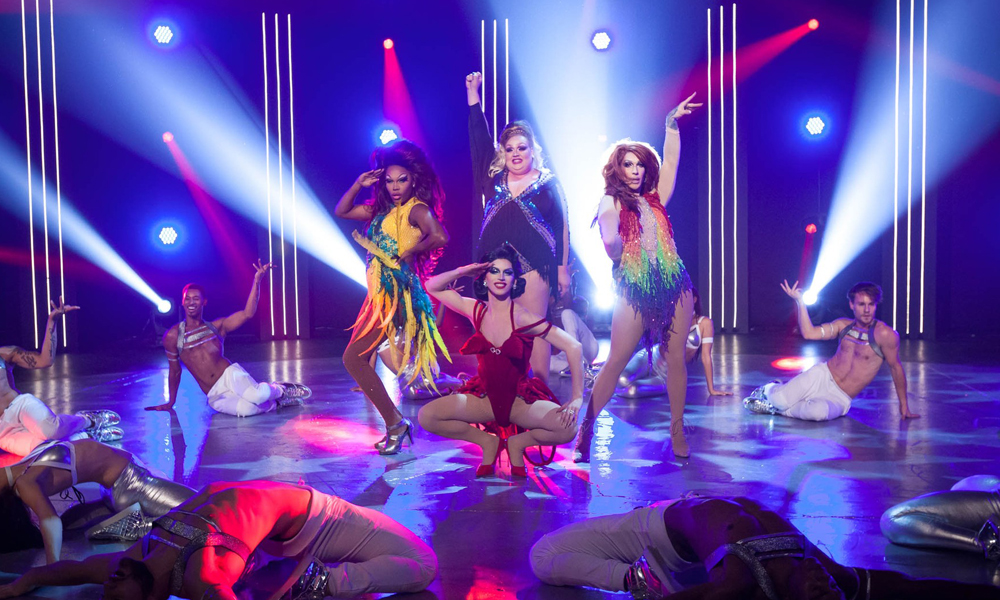 As the final four queens pranced into the werk room for the last time to get ready for final elimination they were met with a tray of drinks, and a very obvious scripted product placement. Ok, we’ll allow it this one time. Kameron finally decided to roll her workstation over to the mirror to get ready with the rest of the girls for the first time this season, and promptly left once she realized how hot the lights were around the mirror. While painting the queens reflected on their best and worst memories of the competition, and some mistakes they have made. Armed with backup dancers, the queens performed their verses, in what may be the most patriotic, and inspiring song about America, maybe ever. All four of them turned it out. However, this is the first time we’ve seen Aquaria lip sync on the show, and we have been missing out. She came to turn lewks, and turn…period. If anybody proved their star status this week it was defiantly Aquaria.

Ru kept the judges all in the family this week, so giving the final critiques were Ru, Michelle, Ross, Carson, and Todrick. The category is… Final Four Eleganza Extravaganza, and the final four all showed up in stunning gown lewks. The final critiques were filled with compliments all around, and really highlighted how far each of the queens had come in the competition. This part of the season is always the build up for the pageantry of the finale. Ru asks the girls to give their younger selves advice, and it is always the most emotional part of the traditional penultimate episode. This was followed by the “why should you win?” question, which also gave us some textbook answers, none of which were shocking, but all of which were lovely. No real decision was made during the judge’s deliberation, and so the final four would be lip-syncing against each other to claim their spots in the final three. Our queens gave us a spectacular performance of RuPaul’s own Call Me Mother. All four of them were so good, Ru declared they were all winners baby, and all four of them would be moving on to the final stage of the competition. It would have been a tough call to make, and we’re all here for an extra queen on the finale stage. Who is going to win? Most importantly, who will win Miss Congeniality Fan Favourite?

Takeaway from episode 12:
All four of these queens are in it to win it. It is still very much anybody’s game and we can’t wait to see who takes home the crown.

What we missed out on this season:
Granted she never landed in a position to have to lip sync for her life, Aquaria really knows how to perform. We deserved to see more of that.

What we’ll see next week:
All of our Season 10 queens are back for the reunion! Tea will be spilt, and Miss Congeniality may be crowned! Vance… Vanjie… Van…jie.