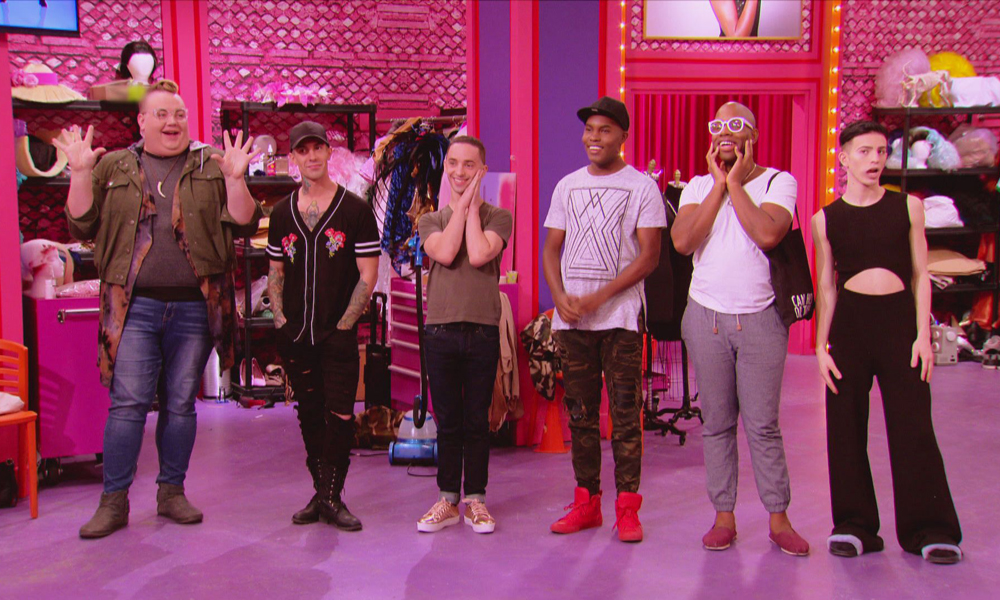 “I’m a martyr to Breastworld”…

Upon arriving back to the werk room after last week’s elimination, our remaining six queens discovered a cryptic departing message left on the mirror from last week’s cast away, The Vixen. After all Vix had been through on the show, she left stirring the pot, it’s kind of tired, but we kind of love it. Even Eureka, said she had come to terms with the fact The Vixen disliked her, but could not deny her raw talent, and wished her the best in her career.

Meanwhile, fresh off her maxi challenge win, Kameron Michaels revealed she secretly wanted to win the Cher challenge, but didn’t want to say anything about it to the other queens because of something we’re not entirely sure about yet. And Aquaria, fresh from her time in last week’s bottom three, denied ever being in the bottom, and claimed that she was only there with the bottom two because Ru “called everybody out in no particular order”. We still don’t know how the other queens could take her seriously with those rhinestone patches over her eyes. Though Aquaria was having trouble with her vision, one thing was crystal clear. There are only six queens left, which means there’s only room for the tops and bottoms. Nobody can play safe anymore. Asia explained that her time in the bottom two was just what she needed to light the fire with her passion for drag, and said it would be different from now on.

The following day in the werk room late night host Stephen Colbert appeared on the screen to present the queens with a clue to this week’s maxi challenge, and introduce Ru for the mini challenge. This week, the queens played Pants Down, Bottoms Up. This challenge saw the queens picking members of the pit crew to take their pants off, and make matching pairs based off their underwear. Fun! The queen who won for making the most matches in the least amount of time, was our girl Aquaria. Thankfully she got those rhinestone patches off in time for the challenge. Her prize for the week was assigning the roles for this week’s maxi challenge. And wait for it… Yaaas! Another acting challenge! This week the queens are starring in Breastworld, which is a RuPaul take on Westworld, though I personally found it just as confusing.

After being accused of not being sportsman like after the elimination, Aquaria decided it was best to let the girls pick their own roles so everybody was happy and confident going into the script-heavy challenge. Naturally, Miz Cracker picked the biggest role of the bunch, because it packed the most punches, something that Cracker excels at. Eureka picked a slightly over the top, and aggressive bingo lady. Asia picked the uptight conservative character. Kameron and Monét picked the modest roles of the guests at the resort. This left Aquaria with the last role, which was a robot servant, a small role that she thought might be her demise. While the queens were rehearsing lines, and getting their wigs ready, Ru did a walk around the werk room to talk to the queens about their roles, and how they were going to stand out at this stage of the competition. A standout moment was her conversation with Miz Cracker about why she thinks she hasn’t won any major challenges yet.

Cracker and Ru came to the agreement that she has everything perfectly planned out, but when it came to the execution, Cracker can’t roll with the changes that often happen during the acting challenges. She vowed to try harder with this challenge. The time finally came to film, and boy, were we in for a treat. Cracker was self-directing more than Michelle and Ross were. For whatever reason, Eureka chose this as the moment she was going to simmer down, and poor Kameron couldn’t remember her lines. On the flip side, Monét was killing it with her improv, Aquaria’s small but mighty role was expertly executed, and Asia’s political role was a breath of fresh air in the final act. We can’t wait to see how this turns out, but all will be ru-vealed after this week’s runway challenge. Category is… Silver Foxy.

The Silver Foxy runway had the girls in lewks that predicted what they would look like in 50 years. Some queens went for it more than others. Miz Cracker, Kameron, and Monét nailed their senior queen moments. Eureka chose to wear a coat “just because”. Asia’s lewk confused the judges at first, but her explanation totally sold it, and Aquaria’s lerk was polished as always, but didn’t quite give as much old lady as the judges were looking for. This week’s guest judges were none other than funny girls, and Broad City’s own Abbi Jacobson, and Ilana Glazer (YAS QUEEN). Michelle Visage showed up to the party in what looked like a Cher tribute outfit that was maybe meant for last week? We still love her, and forgive her for being a week late with this incredible lerk.

When it came to the critiques, Asia, Aquaria, and Monét were given praise for popping off the screen. Aquaria’s small role ended up being one of the most memorable parts of the finished product. Monét’s of-the-moment improv, and Asia’s characterization were also given high praise. Though all three of these queens provided a quality performance, ultimately it was Asia that pulled through to win this week’s maxi challenge. It looks like last week’s lip sync worked on Asia, because she went from the bottom, straight to the top this week, and we couldn’t be more proud of her.

Kameron was critiqued for not selling her character enough, and although she knew her monologue, she didn’t give us the wow moment. Also Ross read her for not covering her tattoos with gloves. (ok?). Eureka was critiqued for not going for it enough during filming, and Miz Cracker was critiqued for not rolling with it once things didn’t work the way she had planned. In the end it was Eureka and Kameron lip-synching for their lives to Patti LaBelle’s “New Attitude.” This lip sync was a tight one, Kameron and Eureka’s energy was well matched, and you could tell they both wanted to fight for their spot.

Not shockingly, Ru decided that they both got to Shantay, and stay in the competition. So the top six live to see another week, and what a week it will be. We just hope there isn’t another acting challenge for the rest of the season.

Takeaway from episode 9:
It doesn’t matter if a queen can’t sew anymore, but they better all take acting lessons before they get to the werk room next season.