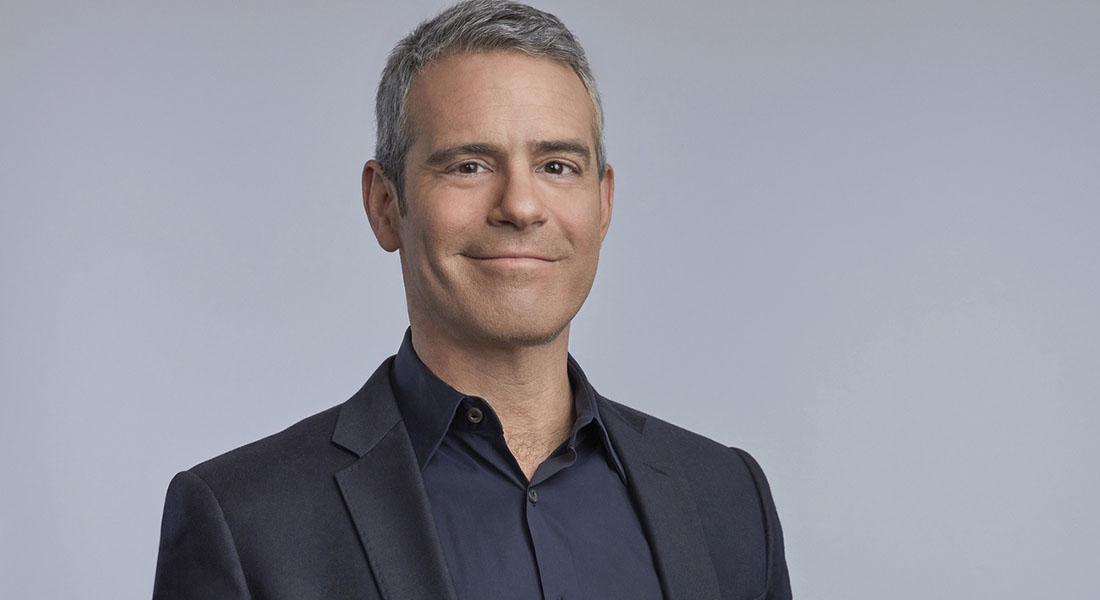 Like his CNN and 60 Minutes pal, Andy Cohen is a rare breed in media success these days: The Real Housewives franchise executive producer and host is part of a generation of gays who have fought on the front lines through the cusp of change, and are now enjoying the fruits of those battles without being defined solely by their sexuality.

Yes, while the world is burning, there is a segment of gay men and women who are grasping the universe by its balls and thriving. Well, at least in North America. And, like Cooper, workaholic Andy Cohen can’t stop building his résumé.

The St. Louis, Missouri, native also helms SiriusXM’s Radio Andy, along with penning several bestselling books. But most importantly, the host of the frothy and dishy Watch What Happens Live is another out gay host of a US talk show.

Cohen fans are fuming because the Bravo show doesn’t air in Canada—yet. “I don’t know why it’s not airing in Canada,” Cohen tells IN. “I wish I knew why. You have to ask Bravo what’s happening. If it were up to me, it would air everywhere.”

Not that we need another man on late-night television—but a gay heartthrob is a different story. The king of guilty pleasures also helmed Fox and Citytv’s beloved dating series from the ’80s/’90s, Love Connection, which he resurrected late this spring (it was produced by The Bachelor’s Mike Fleiss).

Cohen is not just a handsome face; he has some serious journalism cred, as a former CBS News intern, Early Show senior producer and 48 Hours/CBS This Morning producer. And this TV expert (and fan) knows you have to reinvent a classic to make it resonate with a new generation, so this time around, Love Connection features gay and lesbian contestants, a monetary bribe to weed out “fame whores” and a first-impression rating. Predictably, the show was a runaway success for Fox. “We had great luck on this show,” Cohen says.

When he’s not reinventing the dial and making us forget our real-life problems by relishing in others’, Cohen is on the road with—you guessed it—Anderson Cooper on their 20-city national tour AC2, raising money for OneOrlando after last year’s horrific nightclub shooting.

But it’s the Real Housewives franchise that Cohen is most famous for. Or infamous for.

Many critics credit the 49-year-old hairy-chested sex symbol with reinventing reality TV by marrying it with the soap opera formula. Was it a conscious decision?

“In my mind, the hybrid was the best Real Housewives could be—that it would be a soap opera,” the diehard All My Children and The Young and the Restless fan explains. “And that is what it turned into. That element is what attracted me to the project, yes.”

But don’t call him a groundbreaker. “I see the series as groundbreaking—not me,” he diplomatically answers.

Despite his open and naughty nature onscreen, Cohen is surprisingly guarded when you speak to him during a press interview. It’s a little disconcerting, especially when you watch him go head-tohead with superstars on Watch or during those epic, fiery reunion Housewives shows, but somehow it also makes sense. I’ve been interviewing stars forever—and I’ve learned their onscreen personas rarely exist off-screen.

Now that that’s out of the way, it’s time to spill the tea: Cohen has the unique ability and talent to ask bitchy, sometimes inappropriate questions—and somehow he gracefully gets away with it!

He says it’s all about creating good TV: “Absolutely. I consider it a gift,” he concurs. “I think it comes from a lot of time interviewing Housewives. Also, I think people understand and know I’m on their side. I don’t want to hurt them or piss them off. I’m asking the questions the viewers want to know.”

Last month was Pride month, so I wanted to ask Cohen, someone in my generation, what he thought about the annual celebration—and if it needed to be reinvented in some way.

Cohen offers, “I still think Pride is important for everybody. We don’t have equality everywhere yet. There are people who are still in the closet. Pride is one big support group, so it’s still relevant.”

Back to the fun stuff: as the guilty pleasure master, how does Cohen unwind?

“I just travel,” he says. “That’s probably my guiltiest pleasure.”