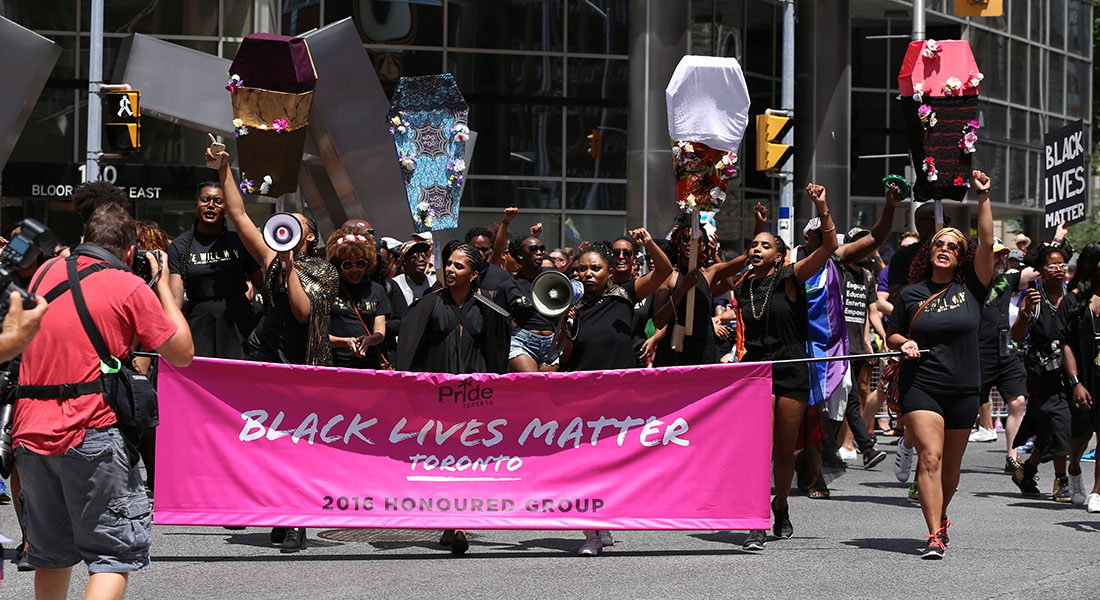 Amidst the outrage, the founders of Black Lives Matter–TO keep their eye on the prize: a more inclusive Pride
By Paul Gallant

Alexandria Williams, the queer co-founder of Black Lives Matter– TO, can’t stop laughing when I ask her if anybody at the Toronto Police Service has ever called her about the group’s demand that Pride Toronto exclude police floats and booths from its marches and parades.

“No, no, I hear you, Paul,” interjects co-founder janaya khan, who also identifies as queer. (Neither of them, it should be said, has called Prime Minister Justin Trudeau a “white supremacist terrorist.”) “As we demand accountability from law enforcement, we understand that law enforcement is not in a place where they are hearing where we are, and therefore we do not engage with law enforcement. And they’ve never reached out to us.”

According to its website, BLM–TO has set for itself the gargantuan goal of dismantling “all forms of anti-black racism,” including “all forms of state-sanctioned oppression, violence and brutality committed against African, Caribbean and Black cis, queer, trans and disabled populations in Toronto.” Considering how uninterested the government and police leaderships have been so far, and how news stories continue to break about Toronto police using unnecessary force against minorities, BLM–TO has found more traction in its narrower, yet controversial efforts to make Pride Toronto more welcoming. Will a less visible police presence at Pride make racialized people and other minorities who have been subjected to police violence feel more included and more safe? It’s shaping up to be an interesting experiment…if the community can withstand the conversation about it.

A quick recap. The demand to exclude police floats and booths from Pride was one of nine demands accepted, then recanted, by Pride’s then-executive director Mathieu Chantelois last summer, when BLM–TO used its position as honoured group to hold a dramatic 20-minute protest mid-parade. In the fall, the Pride board said that in apology for the organization’s “history of anti-blackness,” they would apply their dispute resolution process to the demand. Then, in January, before the board could be reconstituted with new members, the Pride membership, which has swelled with BLM–TO supporters, passed a motion to exclude police floats from the parades and marches.

Since last summer, the exclusion demand has launched a million sometimes nasty Facebook conversation threads, perhaps understandable in a community that, on principle, has been wary about telling anyone how they should look at Pride. Some critics (I’m looking at you, Sue-Ann Levy from the Toronto Sun) have been arguing, either in error or with malice, against a supposed “ban” on police officers participating in Pride, even though BLM–TO never even asked for uniforms to be prohibited, never mind prohibiting officer participation. Critics have also complained the group was a disruptive “invited guest” at Pride, as if they were outsiders, and accused them of being bullies, even as their cause was able to mobilize a great number of LGBTQ supporters, especially people of colour, to join Pride and make a democratic vote. That’s in an organization where minorities have, by Pride’s own admission, historically felt unwelcome.

That doesn’t sound like bullying or hijacking; it sounds like clever grass-roots activism that has opened the gates to the excluded. If you swapped out “anti-racism activists” for “AIDS activists,” I can’t imagine such squeals of outrage over a parade protest or police booths and floats, even though both racism and HIV/AIDS affect different quarters of the LGBTQ community very differently, some very much and some not at all.

“Just to ask the question ‘What happens now with Pride?’ suggests that we’ve become so comfortable with Pride being shaped by gay white men that we actually don’t know how we’ll relate to it when it’s going to be shaped by women of colour, by trans people, by Black people,” says khan. “The concern that Pride will transform into something different and unknown suggests that so many people don’t have community with people of colour.”

“If Pride does what its membership says,” says Williams, “then members are going to be pleased and Pride is going to look like something they can be proud of. There’s so much rage coming to the surface for such small issues that need to be changed.”

In fact, Williams doesn’t see the demand about the police as much different from the other eight demands, which have been accepted without much question by Pride and, judging by social-media chatter, by the community. Space for Black Queer Youth, self-determination for community spaces at Pride, the doubling of funding for Blockorama, the reinstatement of the South Asian stage and the prioritizing of the hiring of Black trans women, Indigenous people and others from vulnerable communities: these are all part of a broader package to make racialized people feel more a part of Pride. “Isn’t the fact that some communities aren’t represented at Pride something we should be shocked about?” Williams asks.

Although I’m against anything that would make an already pretty boring parade even more boring (I’m hoping the police, deprived of their floats, march in tutus, rabbit costumes or leather harnesses), I’m more skeptical of depriving the police of their recruitment booths. Recruiting from minority communities seems to me like a viable way to get better officers who could create a less brutal police culture. But Williams and khan don’t buy it.

“We’re not concerned with the recruitment processes of police because we’re aiming at systemic changes. The Band-Aid solution of recruiting people from diverse backgrounds is insufficient,” says khan.

Though much of the community infighting around BLM–TO has been unpleasant and, at times, racist, the two women see the
discomfort of their critics as a necessary step in the longer process of persuasion. Speaking to the majority white Pride population, “our job isn’t actually to make you feel comfortable,” says Williams, who in her day job is vice-president of equity at the York Federation of Students. “It’s to make our community feel comfortable and safe. The process of understanding why you’re not cool with that is a personal process, but our job is making sure our community is good.”

“Our Pride action has really exposed the political immaturity of this moment,” says khan, who is also executive director of Gender Justice L.A., a Los Angeles-based social justice organization for gender non-conforming, gender-fluid, two-spirited, questioning and trans people of colour. “We held up a mirror to a lot of people whose casual racism began to show, as well as their inability to grasp that we have as much of a right to that space as anyone else.”

I’ve always seen persuasion as a subtle art; ideally, you want to make people change their mind without even realizing they’re changed it. But I accept that to achieve the radical systemic change that BLM-TO is working towards requires far more discomfort. Pride, which has known much discomfort over its history, is certainly an institution that can handle it.

“When we’re challenging someone, if we can create a moment of, ‘Is this true? Could this be true? Maybe I don’t know this thing’, that moment is one of such incredible possibility,” says khan.

PAUL GALLANT is a Toronto-based writer and editor who writes about travel, innovation, city building, social issues (particularly LGBT issues) and business for a variety of national and international publications. He’s done time as lead editor at the loop magazine in Vancouver as well as Xtra and fab in Toronto, and is currently development editor at executive editor at BOLD magazine. 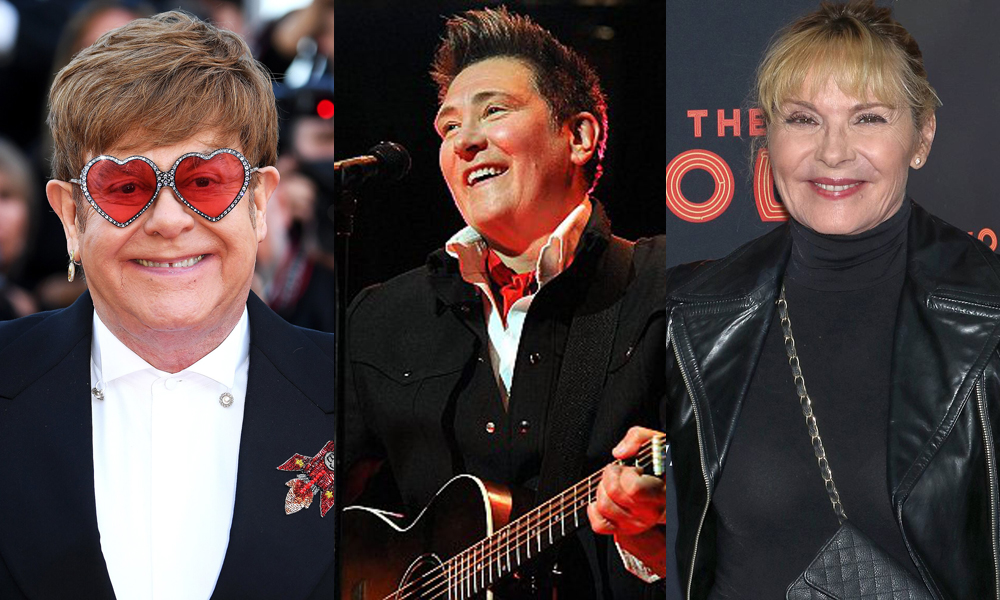 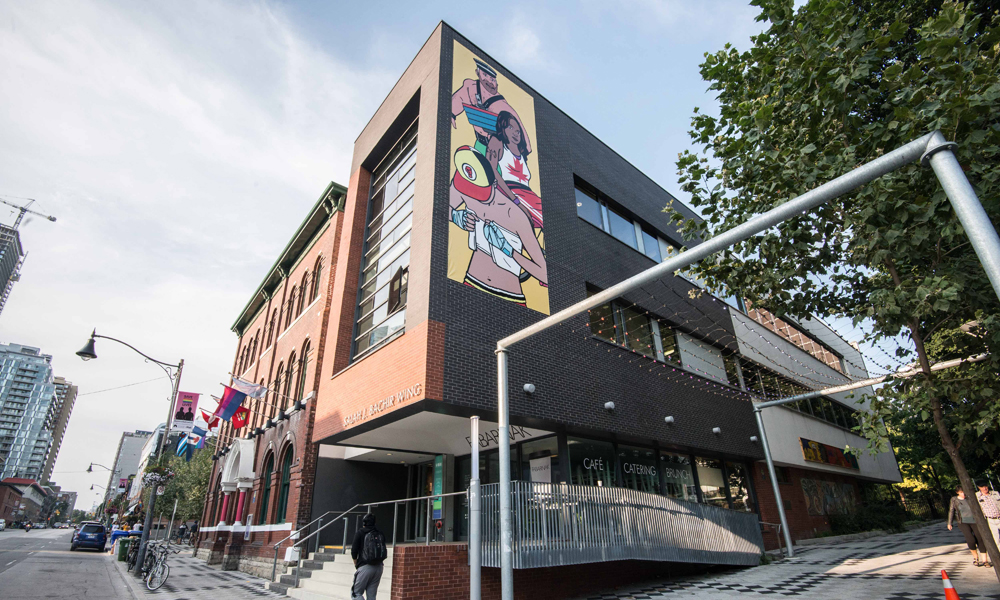 How To Support Pride Month From Home