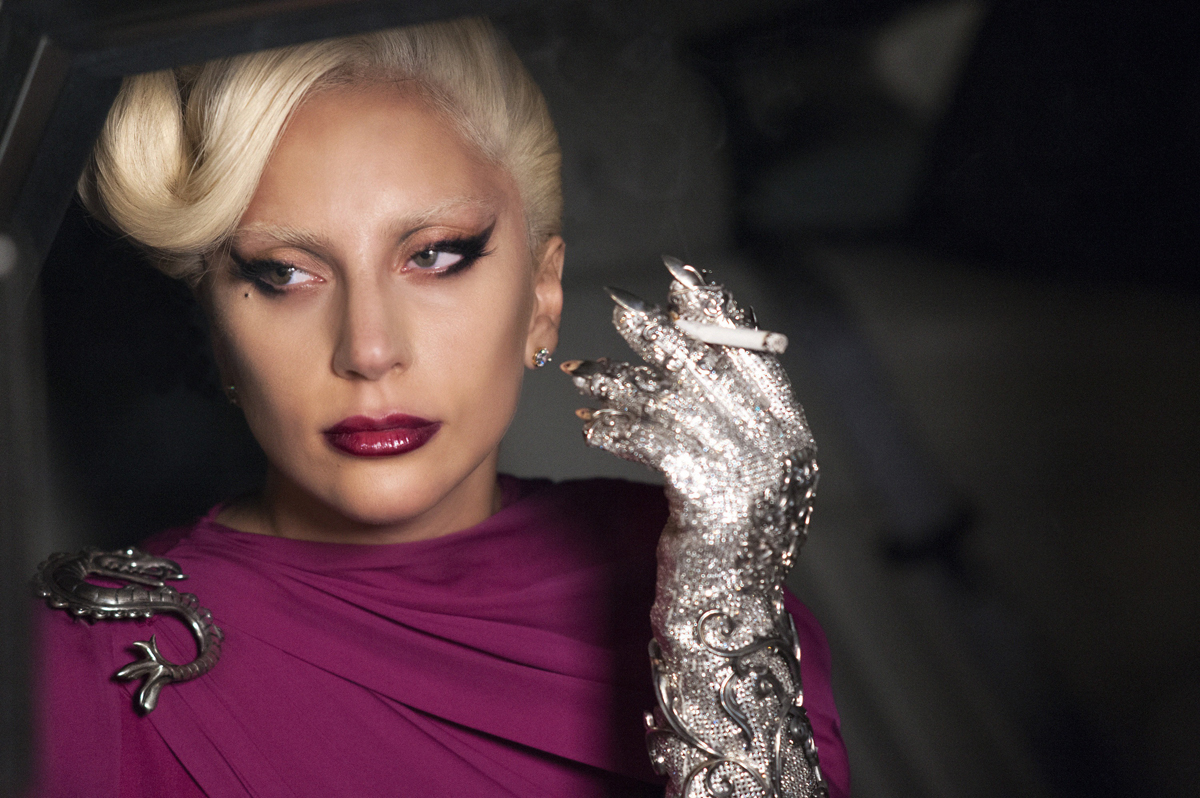 Even monsters have to grow up

Little did Stefani Joanne Angelina Germanotta – take a breath here – realize the thunderous applause the Manhattan native would receive years after she wrote “Applause, Applause” on her Artpop offering in 2013.

Like her performance and social crusading rival Madonna, Lady Gaga has reinvented herself … and catapulted herself to new artistic and stardom heights in doing so.

Gone are the shock-and-awe fashion (the meat has expired, obvi), experimental hairstyles, the suffocating entourage, Twitter feuds (bye, Perez Hilton), and seemingly singular focus on anti-bullying message in her music and interviews.

After selling 146 million global albums and singles, her self-imposed hiatus from the spotlight in 2012 — after what appeared to be a mini-meltdown on social media (over 57 million followers on Twitter, and growing, thank you very much) — the former biggest superstar in the world appeared to be eaten alive by the fame monster she sung so much about.

But like any true artist, Lady Gaga’s greatest days still lie ahead of her. In fact, Lady Gaga’s break from her career might have proven to be her wisest yet. 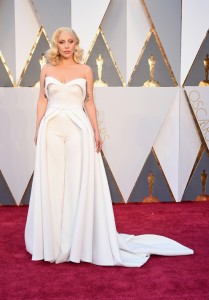 In an interview with Gaga in L.A. before and after she scored her first Golden Globe Award for Best Actress ­– Miniseries or Television Film as the Countess on American Horror Story, the 29-year-old diva told IN Magazine that her vacay from the world was due to a myriad of issues.

“I almost quit music,” she tells me quite matter of fact. “I was fucking tired! I was overworked. It became all about the money. I began feeling like a corporate machine – and my art was paying the price. I didn’t get into this business to sell perfume or take selfies with strangers. I had to take myself back. And the best way to do that? Say ‘no’ more often to things. My image isn’t everything. Our mental states are more important than the bottom line. I wish society focused more on our internal lives more.”

Depression also haunted her for most of her life, she says.

“It hasn’t gone away completely,” she says. “But you can manage it. I take anti-depressants. I’ve tried to go off of them but my doctor has warned me against it. Listen, depression and anxiety has completely changed my life. It’s hard to dig within yourself and find resources just to function. I thought it was unfair. Acting has helped me a lot but what worked for me the most was part of my identity saying no to things I don’t want to do – and I have to embrace my right to say no. And that’s been working for me. Hopefully me talking about it more honestly and more openly I can help and/or inspire others struggling. These days, I’m much better at connecting with people. I haven’t always [been]. I’ve had an affair with isolation – especially when [fame came into my life].”

It was a strategy that worked. (Heck, we might have to add an ‘arm-chair psychologist’ hyphenate to her ever growing skills.)

Little did her “little monsters” know that Gaga would return bigger, bolder and more beautiful than ever. 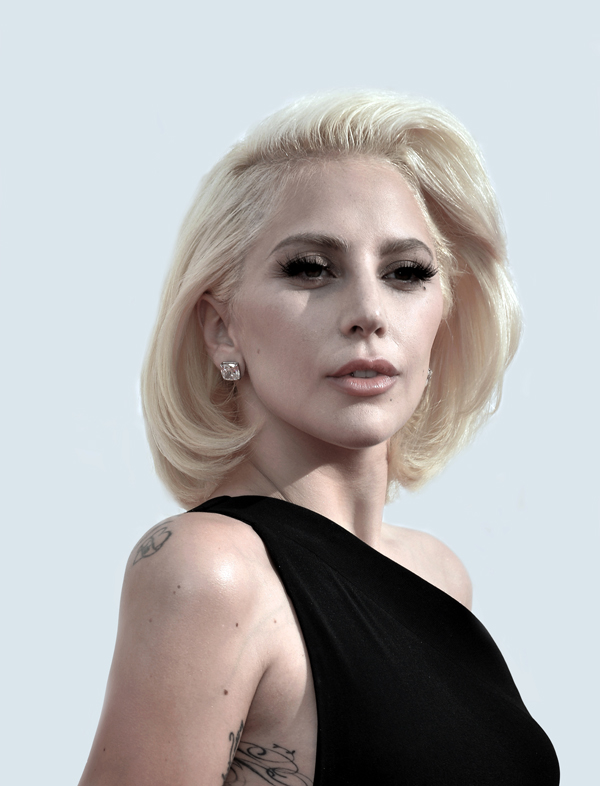 Our first sighting of the new-and-improved Lady Gaga was earlier last year when she delivered one of her most masterful performances at the Academy Awards in homage to The Sound of Music … in front of Julie Andrews to boot! Then, she won her sixth Grammy Award for belting it out with her BFF and idol Tony Bennett in their duet album Cheek to Cheek.

But then she disappeared from the zeitgeist for a few months before her big and out-of-nowhere comeback and ascent into a new stratosphere of super stardom.

Last summer, buzz swirled that one of Hollywood’s most prolific showrunners Ryan Murphy had elicited a tour-de-force performance from Lady Gaga in his FX series American Horror Story. (She appeared on an episode on The Sopranos at age 15.)

Maybe Gaga was giving up music all together – save for a duet with Tony Bennett in a joint album or Barnes and Nobles commercial – and focusing on acting?

Unless you’ve been living under a rock, you know she was a monster hit – and Murphy has welcomed her back for the next season of the cult hit in a new role. No one was more surprised than the queen herself.

“I never imagine this,” she told IN. “I always imagined that I would have a long love affair with music and with art and with reading my books and plays so this is a surprise. And to be awarded a Golden Globe on top of that in my first major role is crazy but I’m grateful. I always wanted to be an actress. I went to acting school for many years. This is just the best thing that could have happened to me, honestly.”

That’s because the Murphy-Gaga collaboration is one for the books. Murphy needs a muse (his last was AHS mainstay Jessica Lange) and Gaga brought out one of Ryan’s best seasons yet. “She’s more than I ever expected,” Murphy tells IN. “She’s the queen in every way. She was a joy to work with. There were no diva moments on our set. She was humble, even.”

Their mutual passion and respect for darkness married their artistic souls. “He is my soul mate,” she confirms.

According to Gaga, light is overrated.

She says, “Playing a killer was good for my soul: I got to put all my rage into the role. I think for many people darkness is just that, a bleak, empty space, empty and void. For me darkness is an expression about pain and you can create things that are so beautiful. That is exactly the thing I got to do on American Horror Story with Ryan and the cast. It was thrilling to return to it. It was cathartic, exhilarating, liberating. I would leave the set every day so full of release. The Countess is very evil. She’s not a good-willed kind of person, but what I do find in her, which I am happy to say today, is that after 100 years she never gave up, no matter what she went through, and you will fail in this business if you do. The true test is if you can continue and stand up and accept failure and move forward. I learned that from her, and I suppose it will stay with me in my music. I love the art of darkness.”

Her AHS (and gay) co-star Matt Bomer agrees. “She clearly has an artistic soul and spirit. And that usually means having to deal with demons.” Diane Warren adds, “Because of the meat dresses, you forget that underneath is a super talented person.”

Yes, it was the perfect role for the phenom who is said to be worth almost $300 million.

Fans of her music will be happy to know that despite Gaga’s acting success, she’s not giving up on music.

“There will be more music; I promise,” she tells IN. “Not sure when but it will be released in 2016 so get ready. I’m not sure what the overall theme and sound will be yet but I’m testing things out.”

Expect her renewed commitment to darkness to influence her even more in future projects.

“I must be very weak because you need to experience weakness to gain strength,” says Gaga of life’s paradox half joking. “Part of becoming strong is being vulnerable about your weaknesses – and that has worked ten-fold for me in this new chapter of my life and career.”

And you can thank the Countess. 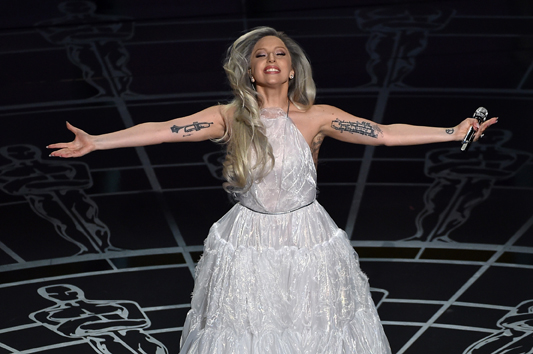 “What was nice about playing The Countess… it reminded me in my own life and music I am at times playing a character,” she says. “Living inside of her is liberating because she doesn’t give a s–about anything. She’s lived too long, knows too much to be bothered by a thing. I am a little bit different than that, but I will say that I think that confidence will stay with me, but who’s to say my music and my position in the world. I only hope to give back as much and blessed things to my fans and to the universe as they have given to me, through my work and art forever.”

Soon after we spoke to Gaga, she was nominated for an Oscar Award for co-writing her sexual abuse opus “Til It Happen To You” with Diane Warren for the film The Hunting Ground. While she didn’t win, Gaga is clearly in the vicinity of becoming a member of an elite group who has an EGOT: Emmy, Grammy, Oscar and Tony Awards.

She already has two (Golden Globe/Grammys); and many critics consider Gaga a lock for an Emmy later this fall for her AHS role, which means she’ll just need the Academy Award. Not bad for someone who was on a milk carton last year. (Oh, we kid.)

While she didn’t win the Oscar (Sam Smith did for Spectre), Gaga says winning isn’t everything.

It’s a message that is important for Gaga to convey to her fans who look up to her for guidance.

She says, “An Oscar would be tremendous but the true win is in the work. I really truly feel that the win for me is always in the creative process. If you can enjoy every second of making a piece with your friends, that is the win. When you are miserable the whole time, this is something else. I know the difference. Till It Happens To You was intended to make people happy in a time of sadness when they felt misunderstood. The nomination lends a voice to so many victims and their families around the world.”

Her Oscar performance of the song blew the roof of Kodak Theatre bringing gravitas and passion to a very scripted and tense ceremony – especially when a slew of sexual abuse survivors shared the stage as she pounded on the white piano in a screaming performance that was merited. Many of Gaga’s family members only realized she was a sex abuse victim during her performance! 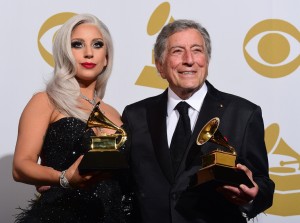 “I’m still working out my look,” she says. “It’s a work in progress… like I am. But I like that I’m more grown up and not wearing so many ‘costumes’.”Gaga’s fashion has also evolved as evident by her stunningly unique and gorgeous white pant suit she adorned at the Oscar Awards created by French designer Azzedine Alaia. She’s less shock-and-rock star; more Marilyn Monroe.

So is the platinum blonde bombshell hair. “I’ve always been attracted to old Hollywood,” she adds.

For someone who wrote about “Bad Romance,” Gaga surprised everyone by falling head over spiked heels with Chicago Fire hunk Taylor Kinney. And they’re engaged!

According to Gaga, Kinney didn’t flinch during her explicit and graphic sex scenes on AHS. “I actually like doing love scenes,” she says. “And he enjoys watching them too!”

“This is the happiest time of my life, by far,” she says with a demure smile.

With a wedding on the way, could little monsters be too?

As she leaves her 20s behind, Gaga says her most prolific chapter is about to start as she enters her 30s.

“I want to teach women – and men – that a woman only flourishes with age and am not diminished by it.”